Canada has had a close relationship with the Kingdom of Bhutan since 1963 when Father William Mackey, a Canadian Jesuit, entered Bhutan for the first time and, under the mandate of His Majesty, King Jigme Dorji Wangchuck, established Bhutan’s first high school in the remote reaches of the country’s Eastern region. Over the next 26 years, Mackey worked tirelessly to develop secular education in the country and became a crucial figure in what his biographer, Howard Solverson, called “an education explosion” in Bhutan.

In the years to come, a handful of Canadian educators, supported by the World University Service of Canada (WUSC), would follow in Mackey’s footsteps, traversing the mountainous and treacherous terrain of Bhutan to teach in rural communities. Between 1985 and 1991, over 40 Canadian teachers were sent to schools in Bhutan through WUSC. In the coming years, the Canadian International Development Agency (CIDA), the Canadian High Commission, Delhi and the University of New Brunswick together maintained the Canadian Cooperation Office (CCO), which acted as a conduit for Canadian-Bhutanese activities, and served as an important focal point inside the country for visas, visits and official contacts. Many of the projects carried out by CCO were focused on educational development. 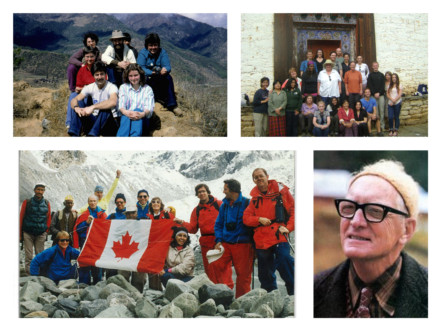 In 2008, Sam Blyth visited Bhutan with his wife and two of his children only to learn that the Canadian government was not renewing its CIDA support for the nation and Canadian Cooperation Office was closing its doors. Mindful of Canada’s special relationship with Bhutan, particularly its contribution to building its education system, the family decided that it was important to continue Canada’s presence in the country, so they stepped forward to help.

On May 5, 2009 the offices of the Bhutan Canada Foundation (BCF) officially opened in Thimphu, Bhutan. The original Thimphu office was run by Nancy Strickland, a former WUSC volunteer teacher in Bhutan who has lived and worked in the country for 25 years. She was supported by four local Bhutanese staff members, all former employees of the Canadian Cooperation Office. The foundation continues to maintain the Thimphu office as well as one in Toronto, Canada. Both offices work diligently to carry on the tradition of Canadian and Bhutanese cooperation, goodwill and knowledge exchange, which began with Father Mackey so many years earlier.

In 2011, Sam Blyth was named Honorary Consul of the Kingdom of Bhutan to Canada, a role that enables him to further facilitate ongoing understanding and appreciation between the two countries.

Until the 1950s, education in Bhutan was mainly monastic. Literacy was confined to the monasteries, and many eminent Bhutanese scholars traveled to Tibet to study Buddhist scriptures.

In the 1950s, under the second king, His Majesty Jigme Wangchuck, Bhutan opened its first secular schools, with both the curriculum and the medium of instruction (Hindi) borrowed from India. But it was in the 1960s, under the third king, His Majesty Jigme Dorji Wangchuck, that Bhutan began to build its education system in earnest. Realizing that the small, isolated country needed to be able to communicate with the rest of the world, the third king made English the language of instruction. This laid the foundations for the network of primary, secondary and post-secondary institutions spread across Bhutan today.

At first, schools in Bhutan were few and rudimentary, and could only offer primary education. With few teachers of its own, Bhutan had to recruit teachers, mainly from neighboring India. In the early days, Bhutanese and non-Bhutanese teachers alike had to endure daily hardships and make arduous journeys over treacherous mountain passes and through leech-infested jungles to bring education to the most inaccessible parts of the country.

With the school system still in its early stages, a number of Bhutanese students were sent to study at the highly acclaimed missionary schools in Darjeeling, India. Impressed by the quality of education in these schools, the Bhutan Government asked a Canadian Jesuit, Fr. William Mackey SJ, to leave his school in Darjeeling and help set up a high school system in Bhutan. The Jesuits and nuns who came to Bhutan in the 1960s and ’70s worked to establish a fully Bhutanese school system that would strength the country’s indigenous cultural and religious traditions while helping its people to modernize.

Since then, education has contributed significantly to Bhutan’s rapid development, in line with its philosophy of “Gross National Happiness.” Being educated in English has enabled Bhutanese students to study in all parts of the world, earning degrees in everything from accounting to medicine to visual arts, and to return to Bhutan to apply their knowledge and skills.

Today, the education system includes formal, non-formal, and monastic schools. Enrollment in the formal system begins at age six, but students can apply to the monastic schools at any age. The non-formal centres provide basic literacy skills for all ages. The government provides free education to all students till Grade 10 and scholarships to students who meet the requirements for higher and professional studies.

According to the General Statistics 2013 produced by the Ministry of Education, there are 554 formal schools and institutions, 388 monastic schools and 885 non- formal education centres in Bhutan. In the formal schools, girls make up 49.8% enrolment. Female enrolment as a percentage of total school enrolment is approximately 50% at every level of general education and at the secondary level, girls make up more than half (51.9%) the total enrolment. Girl’s participation in public higher secondary level has increased from 39.6% in 2008 to 45.5% in 2013. Approximately 23% of primary students, 33% of middle school students, and 60% of higher secondary students enjoy free boarding facilities.